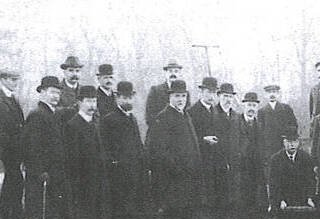 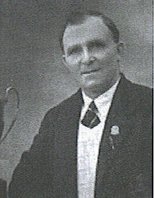 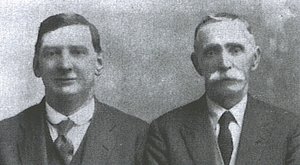 (From the Centenary Book written by John Edwards with additions)

Llanelli Bowling Club was formed in 1906 when the Llanelli Tennis Club moved from the Thomas Arms to their new courts at Stradey. The old Thomas Arms tennis courts were converted to a bowling green of sorts and by 1907 there was the rudiments of a committee with membership set at ten shillings and sixpence (52.5p).

Most of the members were professional people with a strong Masonic element.

In the early years playing conditions were difficult and, with many members using woods designed for use on crown greens, it was decided to seek professional help in the person of a Mr McDonnell from Glasgow who laid the present green which opened for use on 6th May 1911. He later returned to the town to lay the greens at Parc Howard.

In 1915 the freehold to the land was bought from the Stradey Estate by the Llanelly Bowling Club Company Ltd. which had issued shares at One Pound each and with the Registered Office situated at 28 Goring Road many of the old bowls stalwarts still refer to the club as Goring Road. (The club is also referred to as Old Road or Thomas Arms).

In 1913 a committee of Ladies was set up to arrange refreshments during matches, made up in the main by players' wives, and their reputation and high standards are maintained until catering was outsourced in the early part of the 21st Century.

Even the Great War of 1914-1918 did not stop the game and the club even managed to employ a green-keeper during that period.

In the 1920's the fixture list featured teams such as Parc Howard and Bryncaerau which were within walking distance, but those further afield, such as Swansea and Bridgend involved the team travelling by train. For the annual trip to Llanwrtyd Wells the club would hire a charabanc.

One of Wales' best known bowlers of all time was the great Alfred J. Stacey. The former captain and player of Llanelli RFC played bowls for Wales for seventeen seasons, captaining them in 1925. At club level he won the Singles Championship on five occasions and, having won it consecutively between 1918 and 1920, won the cup outright and then gave a new cup to the club. Although occasionally playing for other clubs he always retained his membership of Llanelli. His name is perpetuated through the Stacey Cup at Llandrindod Wells and the A.J.Stacey Cup at the Llanelli Open Tournaments.

Other notable players who made their mark in the 20's to 40's were Will Skym, Tom Evans, D.J.Phillips, S.O.Davies, W.H.Charles and Fred Thomas. Club inclusion in the Welsh Teams continued through the 50's and 60's with Fred Thomas captaining his country in 1963. Colin Rees and Peter Bailey were the final two club members to make it into the Welsh side with Bailey representing the club for the final time in 1980.

Whilst the number of members has decreased over the years the club can still put out two League Teams on a Saturday afternoon, which is no mean feat. We also rely on the goodwill and hard work provided by a number of members who maintain the green, surrounds and clubhouse ensuring a good future for this renowned institution.